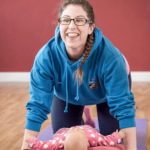 Our Founder of YogaPupz LTD:

Sarah is the founder of YogaPupz LTD, she is trained in all things Children's Yoga and has real passion for working with babies through to teens.

Sarah formed this company back in January 2016, she has a vision of making Yoga available for children of all ages - working with private groups of babies and toddler through to delivering sessions to children in schools, colleges and organised club such as Brownies, Guides and Scouts.

In 2016 she won the Amazing Wearside 'New business award' and was a finalist in the Sunderland Echo Awards.

In 2017 we have were nominated for 'Best Franchise/Licensee for Baby and Toddler groups' which is awarded in October 2017.

Since January 2016, Sarah has grown the business across the North East by introducing 2 instructors to the team covering Washington,  Gateshead, Chester-le-Street and Durham (including Consett and Stanley).

You can meet the team below, you can click on each instructor's image to see their personalised web page:

Our Current Team of Instructors: